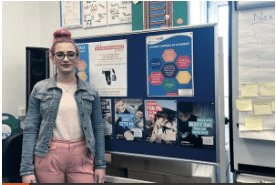 Courtney found a role in a different sector

From the age of 15, Courtney McGowan from Larkhall in South Lanarkshire, assumed a full-time caring role for her partner who had cystic fibrosis. Sadly, he died in 2018.

With her previous experience in care, 18 year old Courtney decided she wanted to get back into work. She contacted Fair Start Scotland and after a few meetings with her Key Worker, Courtney was referred to specialist support ​a charity who are committed to helping vulnerable people.

Soon after, Courtney took part in a Positive Choices course to develop her skills for employment. As part of the course, Courtney received help to manage her finances and improve her core skills. She passed the course and gained a Scottish Qualifications Authority (SQA) level 3 award in Health and Wellbeing.

“When I started the programme, my confidence was at an all-time low but I was made to feel at home and the support I received was really personal to me.

“I could tell my confidence was gradually increasing. The course was very useful, I learned about myself and it really helped me on my journey into work – I also managed to add the SQA award to my credentials.”

I was able to go at my own pace and all the decisions were mine to make. It has made a huge difference to my life and I am delighted with the outcome. The preparation prior to my interview was instrumental in me securing this role. It gave me confidence and belief that I could make the job mine. The whole experience was immense and helped spur me on to get this position. I am looking forward to helping people who need the extra bit of support, just like I did.”

Fair Start Scotland, an employment support service commissioned by the Scottish Government and delivered by Remploy across Lanarkshire and Tayside, aims to help people into fair and sustainable employment through tailored and individualised support.

Nic’s life is back on track

Stuart gets a new start with M&S

David gets fast-tracked into Customer Services

Bobby is thriving in his new security role